A Samba beat bounced its way into my hotel room from Copacabana Beach below.  It was my first day in Rio and this area of Brazil was exactly what I grew up imagining South America to be. I was instantly smitten with the colonial buildings set against steep hillsides of tropical rainforest, Samba music day and night, Caipirinhas served in coconuts on the beach and the sidewalks… the graphic, black and white mosaics that line the beachside boardwalks and city streets. From one end of Copacabana to the furthest end of Ipanema, each street with its own unique pattern. Joyfully, I found the story behind the Rio sidewalks is as interesting as they are beautiful.

The history of paving and mosaics extends back to around 3000 BC. However to reveal the origins of Rio’s cobblestone sidewalks, let’s only go back so far as 1498. That year the king of Portugal, Don Emmanuel I, decided that his Castelo de São Jorge barracks and prison in Lisbon would have its garden paved.

The idea came from one of the king’s right-hand men, Lieutenant General Candido Pinheiro Eusebio Furtado, who instructed the prison inmates to lay white limestone pebbles and black basalt stones in a zigzag pattern across the castle’s courtyard. The new-look garden became a popular place for locals to spend time.

The tiled courtyard also became the subject of Portuguese literature pieces such as “The Arch of St. Anne” (1845) novel by Almeida Garrett and poem “Crystallizations” (1879) by Cesario Verde. The garden then became even more famous in 1842 when one of the earliest forms of photography, Daguerreotypes, was used to capture the unique cobblestone. 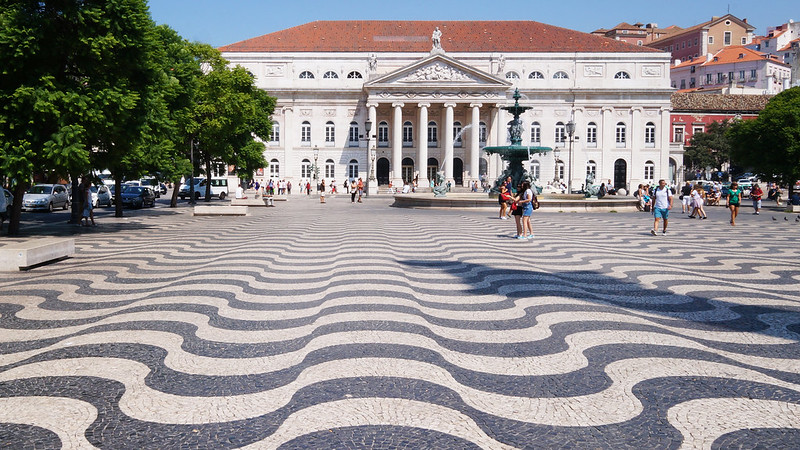 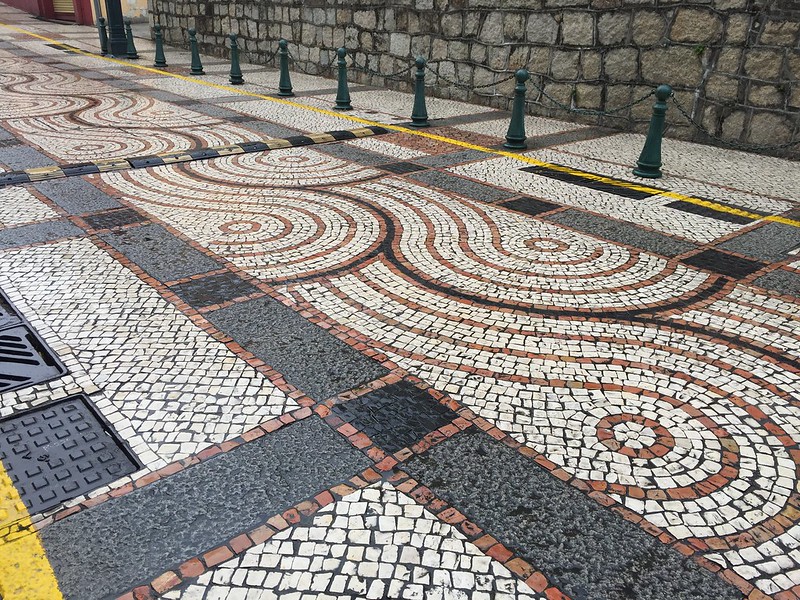 The mosaics get a name

These mosaic pavements became known as Calçada Portuguesa, and the success of the courtyard led to the decoration of all Lisbon’s pavements in this manner, beginning with Rossio Square in 1848. Black and white “vidraço” (glasslike stone) tiling transformed the Square with an undulating wave pattern in reference to Portugal’s great maritime heritage and was so named “Largo Mar” (wide sea).

The trend for decorative cobblestones spread throughout Portuguese colonies, to places such as Macau and Brazil. In 1905-06, Atlantica Avenue, the road running along Copacabana Beach in Rio, was undergoing urbanisation, and local Mayor Francisco Pereira Passos brought in Calceteiros (pavers skilled in the Calçada Portuguesa technique) and materials from Portugal to pave the Copacabana Beach boardwalk in a wave pattern that resembled Rossio Square.

In 1972, Brazilian artist and landscape architect, Roberto Burle Marx, was then engaged to renovate and extend the paving. He chose to retain the essence of the original wave design down the promenade, only widening the curvature of the waves. In the newly paved areas of the avenue, he designed an abstract tribute to traditional Brazilian folk art, which used black, white and red coloured stones.

Calçada Portuguesa can now be found in other areas of Brazil, such as Manaus and Sao Paulo. The meanings of the designs are reinterpreted in the context of their location. For example, in Manaus, the Largo Mar design is considered a depiction of “Encontro das Águas” (Meeting of the Waters). This is the incredible natural phenomenon resulting from the dark Rio Negro, lacking in minerals, converging with the light coloured, silt carrying Rio Solimoes. While the two rivers meet in the same channel, they do not mix due to their disparate densities, temperatures and speeds – and instead flow side by side for 6km.

The mosaic Rio sidewalks are as iconic as the silhouette of Sugarloaf Mountain or towering Christ the Redeemer. Don’t forget to add them to your Brasil bucket list!