I’m partial to many lady-like pursuits, such as the wonderful British institution of afternoon tea (sometimes referred to inaccurately as “high tea”). I am quite happy to while away an afternoon sharing a dessert stand of delicate morsels with close friends while chatting over a flute of bubbles and a warm pot of tea. Upon my arrival in the one-time British outpost of Singapore, I immediately earmarked two hotels as favoured future afternoon tea locales: Raffles Hotel and The Fullerton Hotel. Both are appropriately located in colonial British buildings, although very different in style. While accommodation prices are lofty, I chose afternoon tea as an excuse to sit and spend a while in their individual splendours and compare their teatime offerings.

For more on Singapore, see these posts:

The Most Delicious Things to Eat in Singapore

Pins and Needles – A Thaipusam Experience in Singapore

Raffles Hotel was the lodging of choice for famous writers such as Rudyard Kipling and Ernest Hemingway, among others. The Hotel’s bar was also the birthplace of the saccharine signature cocktail, The Singapore Sling. Originally built as a private beach house in the 1830s, the tropical, colonial-style building stood on the waterside that now has been pushed back 500m from its location by Singapore’s land reclamation. Raffles Hotel opened as a hotel for the first time in 1887 as a 10 room bungalow and has since exchanged hands a number of times. It has been declared bankrupt, added to, and had multiple refurbishments in its evolution into the impressive luxury hotel that takes up nearly an entire city block today.

Raffles Hotel, named after Sir Stamford Raffles, founder of Singapore, has garnered many affectionate nicknames. These include “grand old lady of the east,” evidence of its glamorous and exotic reputation, along with “Rendezvous of Planters,” referring to Singapore harbour being the largest trader of raw rubber in the 1910s. Tales about the hotel include an escaped circus tiger, countless distinguished guests and the inspiration for some of history’s literary greats. While a Singapore Sling in the Long Bar will set you back approximately $30 Singapore dollars, the peanuts are free and the décor will have you thinking you forgot to pack your safari suit. But we are not here to talk about the Sling, we are here for afternoon tea!

Tea in the Raffles Hotel Tiffin Room certainly has old-world glamour. If you are not staying at the hotel, this is the closest you will get to seeing inside the main building completed in 1899, and it has gorgeous colonial charm, reflective of the building’s exterior.  The dim sum buffet is an interesting localisation, one my husband showed much appreciation for.  I preferred the traditional tea selection with a delicious array of scone flavours and the dark chocolate, raspberry and Earl Grey tea cake was divine. The staff were attentive and quick to offer another pot of tea or to top up the empty silver tiers. A harpist serenading guests and polished, almost faultless, silverware is evidence that teatime is still a celebrated occasion and time-honoured tradition at Raffles Hotel.

The Fullerton Hotel was completed in 1928 and at the time was the largest structure built in Singapore. It was named after the first governor of the Straits Settlement, Robert Fullerton. The neoclassical building was designed to echo the trend for revived ancient Roman style architecture, popular in Britain through the 18th century, and the imposing form was thought to make a statement about British imperialism. Among the government departments and commercial businesses that operated from within what was originally The Fullerton Building; the Post Office and Singapore Club were the most notable.

The building’s lofty height and waterfront position also lent it to become a lighthouse to guide ships coming into Singapore harbour. In 1997, the building was gazetted by the Singapore government for conservation. Four years later, after extensive refurbishments and alterations, it officially opened as The Fullerton Hotel. As you pass through the hotel today, you cannot miss the two British made, royal endorsed, red pillar style post boxes located on ground level – a tribute to the building’s first and longest function as a General Post Office as well as the building’s British heritage.

Afternoon tea at the Fullerton Hotel takes place in the Courtyard Restaurant. The name is a little misleading as the “courtyard” is an “atrium”. So although you will enjoy the natural light from the glass ceiling, you will be in air-conditioned comfort conducive to a hot cup of tea or coffee (and hot and humid weather outside). The atmosphere feels just like any modern hotel lobby, there is no real semblance of the unique exterior of the hotel or its history. The savoury and sweet treats served with tea are similarly modern and international. Bite-sized bagels and pistachio custard puffs are presented alongside traditional scones and finger sandwiches. Afternoon tea is entirely table service at Fullerton Hotel, though for us staff attentiveness was patchy and slow. The silverware was noticeably worn and scratched, and was symptomatic of the overall atmosphere that afternoon tea is not an occasion, just an everyday affair. 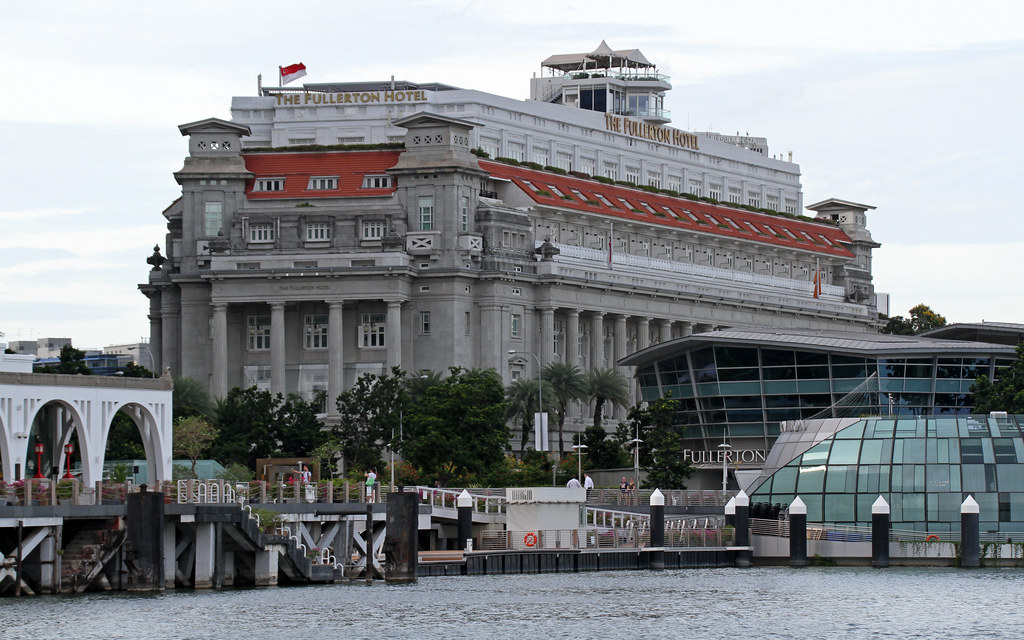 Overall, there can be only one victor… the Raffles Hotel afternoon tea, for its elegant, old-world atmosphere and service.  While the food was equally good at both hotels, tradition and ritual is obviously held in higher regard at Raffles, evident by impeccable surrounds, silverware and service. I would definitely go back for another round of teatime delight at the Raffles, while at Fullerton Hotel, once was enough.